Titanic was a complete and utter blockbuster from the moment it got its first screening. It was so popular that Paramount Pictures had to send out replacement wheels to the cinemas, because they had worn out their copies. Kate Winslet became an acclaimed actress and was nominated for high-profile awards such as an Oscar, and was transformed into a commercial movie star thanks to her role as Rose DeWitt Bukater. 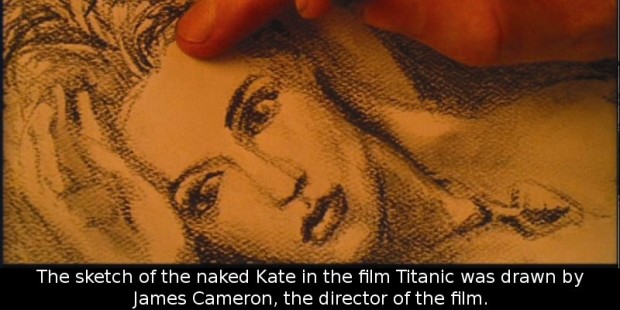 During one of the movie’s famous scenes Winslet’s character was drawn naked wearing only a locket by DiCaprio’s character Jack Dawson. The scene featured the drawing process of the sketch. Many people believe DiCaprio’s hands were filmed drawing the sketch. However, not only did DiCaprio not paint the drawing, but his hands weren’t the ones to be filmed.

James Cameron, the director of Titanic, drew all of Jack Dawson’s sketches in his sketchbook, including the one of Kate Winslet. James Cameron’s hands are also the ones which appear during the drawing process in the scene.