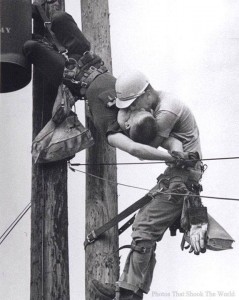 The Kiss Of Life by Rocco Morabito, 1968 Pulitzer Prize.

This 1968 award-winning photo entitled “Kiss of Life” shows two power linemen, Randall Champion and J. D. Thompson, at the top of a utility pole. They had been performing routine maintenance when Champion brushed one of the high voltage lines at the very top. These are the lines that can be heard “singing” with electricity. Over 4000 volts entered Champion’s body and instantly stopped his heart (an electric chair uses about 2000 volts). His safety harness prevented a fall, and Thompson, who had been ascending below him, quickly reached him and performed mouth-to-mouth resuscitation. He was unable to perform CPR given the circumstances, but continued breathing into Champion’s lungs until he felt a slight pulse, then unbuckled his harness and descended with him on his shoulder. Thompson and another worker administered CPR on the ground, and Champion was moderately revived by the time paramedics arrived. Champion survived and lived until 2002, when he died of heart failure at the age of 64. Thompson is still living.